Photo courtesy of DanielKHC at Flickr.com.

Droughts are a worldwide problem, with water in short supply in many different countries. Australia and Spain are both suffering through record breaking droughts right now. It hasn’t gotten much attention in the US, but rainfall in Spain is at its lowest level in 40 years. This comes at a time when population is booming and per capita water use is rising.

Water use is a very emotional issue in Spain, and tensions are running high between neighboring cities and regions. Opinions are divided largely along geographic lines; many people living in the southern provinces favor redirecting water from the north (where the drought is less severe). No one in the North wants to sacrifice their water rights to support wasteful behavior though, and water redirection projects face strong opposition. To break this logjam,

…the government is building more desalination plants, adding to the more than 900 already in Spain – the largest number in any one country outside the Middle East.

There is some concern that these energy intensive desalination plants will drive up the price of water while also creating even more climate change. It’s a no-win situation, like trying to prevent an avalanche by running a snow maker.

Leaders in Spain are looking for a better solution. The country is currently hosting the 2008 World’s Fair in Zaragosa, and the theme of Expo 2008 is “Water and Sustainable Development”. New technologies are on display, including water saving fixtures for the home and agricultural techniques that conserve water. Government programs are encouraging people to adopt these innovations with tax rebates and grants, and if the Spanish are successful in conserving their water, they may be able to stop the desertification of their country. Otherwise, climate change will devastate the environment, with lasting effects on the economy.

If you get a chance to visit Zaragosa, you’ll see an alternative vision of the future, with clean technology offering jobs and climate security. The best vantage point to view the fairgrounds is atop the 250 foot tall Water Tower building. 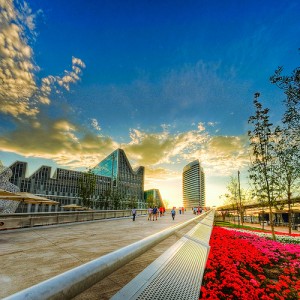