Photo courtesy of Pixel&Fork27 at Flickr.com.

A man in Georgia was recently called out on news shows around the country for being the biggest water hog in his county. News vans parked in his driveway, his behavior caused the city to introduce new rates for excessive use, and Chris G. Carlos was too embarrassed to even step outside. Many of his neighbors were interviewed for their opinion about watering a palatial lawn and running fountains during the worst drought Atlanta has seen in recent memory:

â€œI think itâ€™s absurd, I really do,â€ said Ken Scott. Scott lives across the street from 4151 Thunderbird Drive. Itâ€™s a single home that uses as much water as a 60 home subdivision. â€œWith all the pressure on everybody not to use water and to conserveâ€¦I think itâ€™s ridiculous,â€ said Scott.

The good news? Public shaming apparently works! The water hog hired a PR company to tell the world that he’s changing his ways. That’s what you do when you’re rich and really make a mess – you hire a professional to apologize for you.

This begs the question – can public shaming be used to change other people’s wasteful habits? Many cities cite businesses and homeowners for wasting water (Las Vegas even has a dedicated water police force). What if the database of offenders was published online, for everyone to see?

Many celebrities are also guilty. Would fans still buy merchandise if they knew the extent of water wasted by Celine Dion and Tiger Woods?

The Palm Beach Post did a study of local water usage and found Celine Dion’s 5.7 acres in Jupiter, Florida, used about 6.5 million gallons of water in a year. That’s more than 250 times the amount of water the average resident uses, or equivalent to filling a 50-gallon bathtub every four minutes.

The reputation of public figures is essential for selling their “product”. Even a hint of scandal can undermine sponsorship deals or delay financing for tours. So, it doesn’t require a country club membership or private audience to gain leverage over most celebrities. We ask performers to be our role models, and many of them may not even know that they’re wasting water on a flood-like scale.

When Kathie Lee Gifford was interviewed about sweatshop conditions among the workers who made her branded clothes, she probably had no idea about the true situation. But, the scandalous news coverage quickly changed her business habits and also made Americans more aware of worldwide labor conditions. Perhaps a frank discussion about the bad habits of water hogs can encourage all of our neighbors to adopt water saving devices and get runoff out of the streets.

And don’t forget Lance Armstrong, who used the most water of any individual home in Austin, Texas! Five gallons a minute, anyone?

“I need to fix this,” Armstrong said. “To use that much more water (than most residents) is unacceptable. I have no interest in being the top water user in Austin, Texas.” 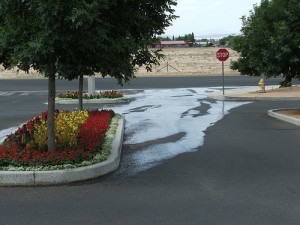 Photo courtesy of 89AKurt at Flickr.com.